A group of five men park their cars and walk to the site where they are constructing a house. Their temperatures are taken, their masks are donned. It’s before 7 a.m., and it’s already hot. Texas in August is not for the faint of heart.

These men are part of Covenant’s Men in the Word, our early morning men’s Bible study. This group of five to seven worked together over the summer, growing in their carpentry skills and relationships. They were diligently building two houses for phase 2 of the CommunityFirst! Village. 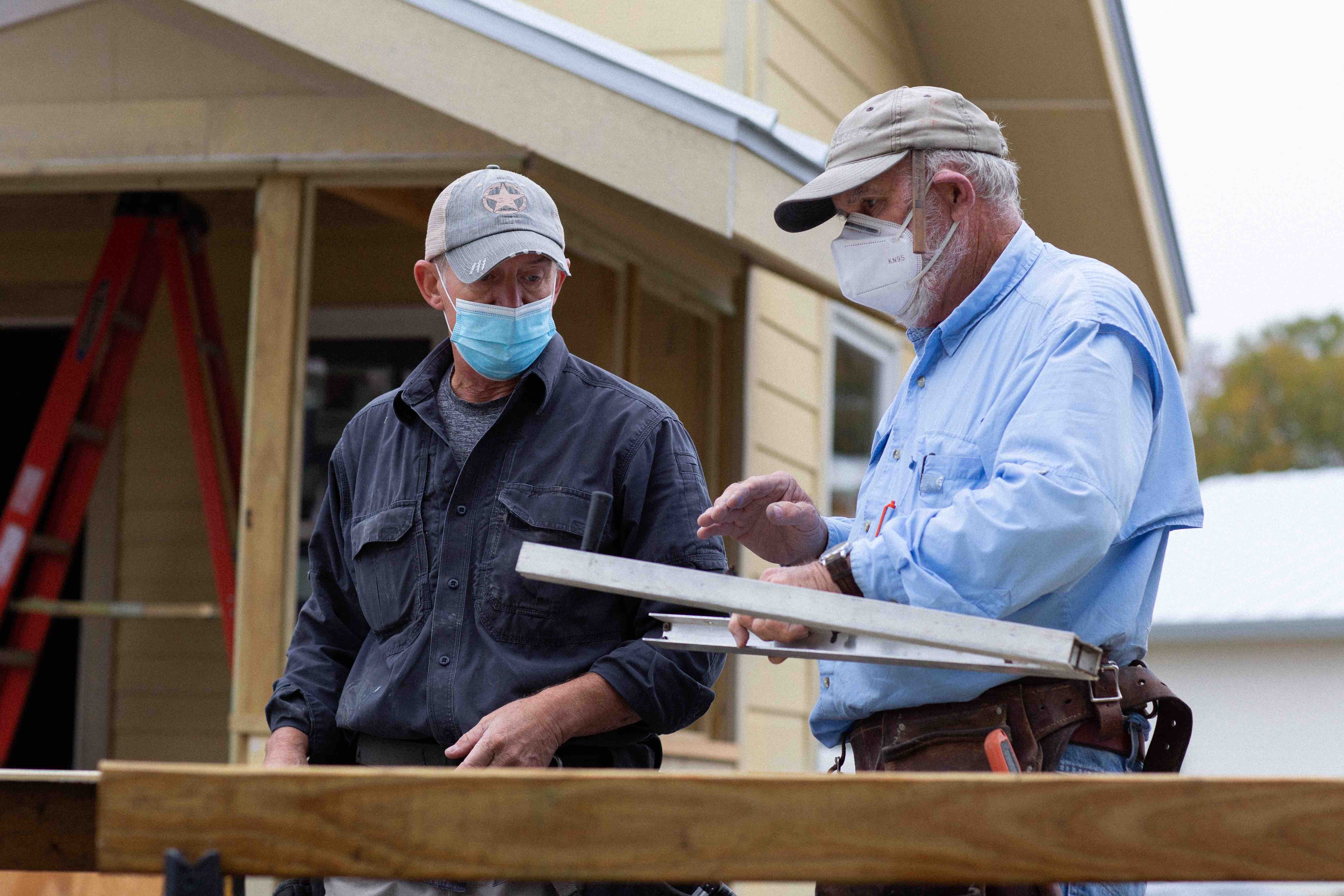 It is the latter premise – relationship – that guides the development of CommunityFirst! Village, a 51-acre master-planned community that provides affordable, permanent housing and a supportive community for men and women coming out of chronic homelessness. Alan Graham, CEO of Mobile Loaves & Fishes and chief visionary for CommunityFirst! Village, has built these organizations on relationships — with God, his family, staff members and certainly with the homeless men and women he’s been engaging on the streets of Austin for more than two decades.

Graham is oft-quoted that “Housing alone will never solve homelessness, but community will.”

It’s the community that has banded together to help build, support, fund, interact and so much more at CommunityFirst!, which is located northeast of Austin. Covenant’s Men in the Word also built a house in the first phase of CommunityFirst! 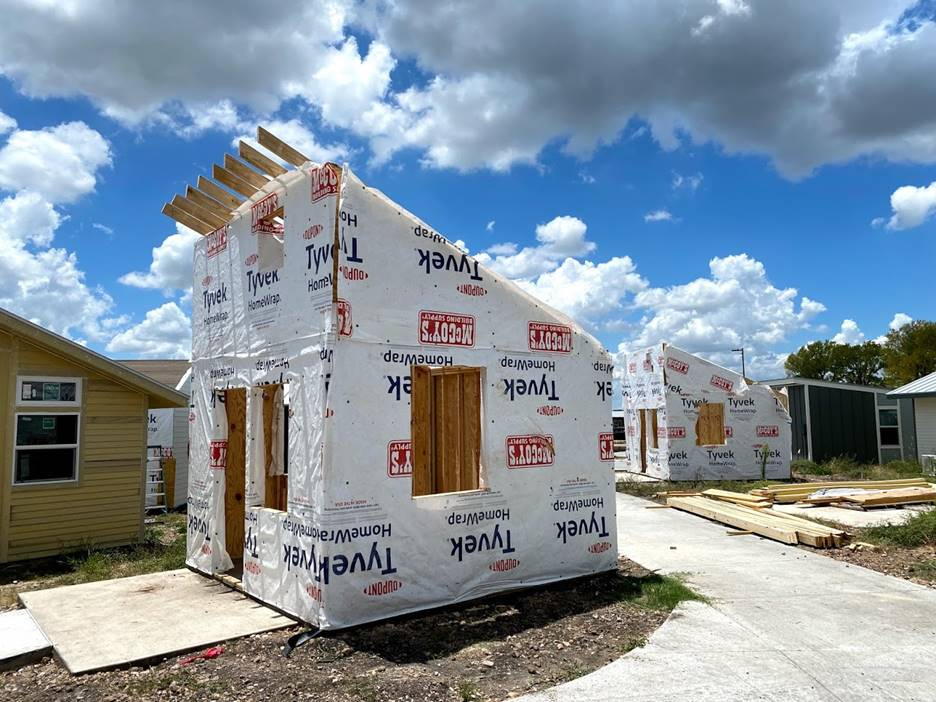 Beginning
This time around, Men in the Word is building two houses, both designed by Covenant member Fred Worley. Fred wanted a house that would stand out as special. “These two houses are grand, but they are complicated to build,” said team leader Harry Evans.

When the men worked on the first house in late 2016, they used a kit to build the “Covenant Cottage.” Men in the Word leader Harold Skaggs compared building that house to using Lincoln Logs. He said the change was made for a couple of reasons.

“The whole idea of building, at least for me and for most of the Men in the Word guys, is that it’s an opportunity for camaraderie and to do something together. We want to get outside of our own selves. We want to do something for the homeless community.”

Harold explained that when using the kit, the total work time was half a day. “Yes, we had more people involved,” he said,  “but it was such a short burst of activity and then we were done.

“Another reason for the change is that our Covenant Cottage was complete and it sat unoccupied for almost a year-and-a-half. I think it was because it was identical to most of the other houses that were also built from kits. Some of those were in better locations. Since the residents pay rent, they have the opportunity to choose the houses they want. That’s why we chose to do something unique,” Harold said.

The new design has turned out to be a lot of work. “Building took longer, and we were delayed because of Covid,” Harold said. “We were supposed to start in March and we waited until we felt like we just had to get started. We couldn’t delay any longer, especially when we thought about providing a home to get someone off the street.

Brian Millington, who has the most construction experience of the crew, said he was all-in despite the adverse conditions when the team got started at the end of June. “We are building through the hottest two months of the year.”

Brian said there were no timelines for the project. “It’s hard to gauge how long this would take because of our ages and skill levels. A couple of us are carpenters; the others are just eager to learn.” 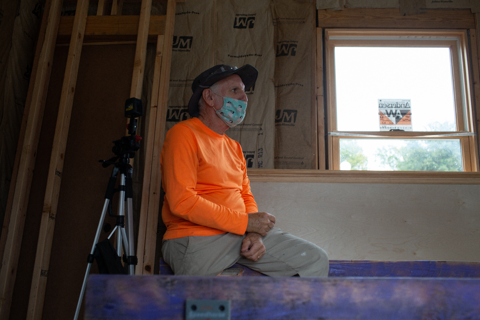 Brian said, “A CommunityFirst! staff member told me he’s never seen a crew out here every day. With five or six guys here every day for four or five hours, we get a lot done.”

Carpentry is a hobby for Brian, who usually builds furniture, not houses. “This project has been fun, especially the camaraderie with the group,” Brian said.

Dave Hoffman agreed. “The fellowship with the guys is what gets me out here every day. And the fact that we’re doing something to help somebody else. We’re all learning so many things!”

Building
In late June, the team went ahead with a select group of men with some specific skills – construction, electrical, design – and who were also committed to wearing masks. “This was a hard decision because on one hand, the joyful fantasy of large group participation was lost, while on the other hand, two homes for folks that badly need them were gained,” Harold said.

Though there’s not an instructional kit, the team is following sequential steps. “We built the walls at my ranch in the shop,” Harold explained. “We put the 12×12 walls on a trailer flat, carried them to CommunityFirst!, and erected four walls for two houses in one day. Then, we added the rafters, built the porches. It’s really an incremental process of on-site building, once the walls were done.” 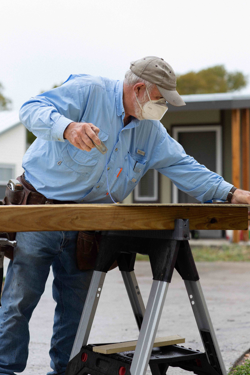 On the day I talked to Harold, the men were adding Hardie Siding, and Harold had a story about those materials. “Fran Carter, who runs Brightwing Custom Crafted Exteriors, donated all the siding. Every time he would finish a job, he would have a little Hardie left over and we would go get it. He has donated all the Hardie for these two houses.”

To complete the work, Covenant member Andrew Chapman, a licensed electrician, along with some additional electricians wired the houses to specs, and installed fixtures, ceiling fans and lights. A master electrician signed off on the work, Harold said.

“These two houses are cute!” Harold said. “They’re just neat. Ours is extra special because it has a screened-in porch where people can enjoy being outside without the bugs!”

Bonding
Harry said every day that he was out at Community First!, he was reminded of the need. “There was a guy living in the house next door,” he said. “We were out there building homes for people who don’t have a place to live. I put one foot in front of the other because of that every day that we worked.”

Harry is surprised to be leading the crew. “When I volunteered, I thought I could help out and learn a few things,” he said of his initial contribution.  “I woke up one day and I was running the project.”

Harry’s got the experience. He was chief of staff for the Austin Fire Department for six years. “I know about running crews. Out here, everyone gives 100 percent every day.”

“We all have a real sense of accomplishment and joy that we’re doing this,” Harold added. “We all have a common sense of what we need. There’s no prima donna on the team.”

“Each person brings a unique background, skillset and style to the project. The melding of these diverse personalities and gifts into a team has been the result of prayer, humility and purpose,” Harold said.

Men in the Word meets virtually on Thursday mornings at 7 a.m. Find out more here or by contacting Harold Skaggs. 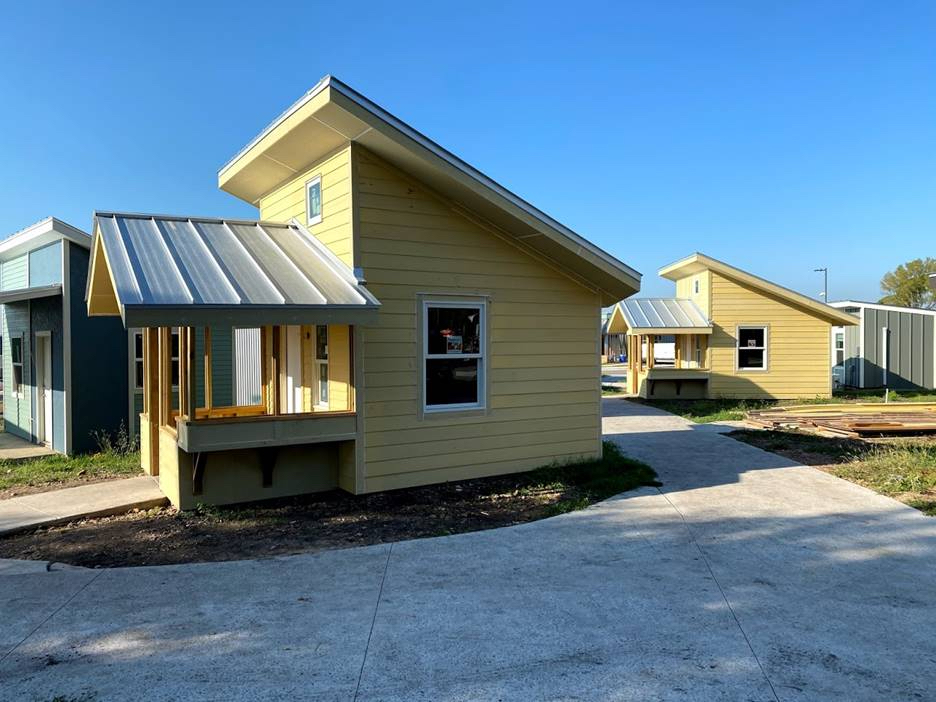 Austin’s Homeless – at a glance

One of the groups hardest hit by the Covid-19 pandemic is Austin’s homeless. When the city first started following stay-at-home orders, many services that Austin’s homeless community relied on were closed – including fast-food restaurants, churches and soup kitchens.

Yet long before anyone heard the word COVID-19, area homelessness was growing. The city did its annual census —  know as a “point-in-time count” of homeless people living in Austin at the end of January 2020. The tally showed11 percent increases in the city and in Travis County.

On Jan. 26, 2020, volunteers counted 2,506 people experiencing homelessness. Of those, 1,574 were unsheltered, living outside, in tents or in cars; this is a 45 percent increase in the number of unsheltered homeless people over the 2019 count. During that same time, the number of people in shelters or transitional housing was 932, a 20 percent drop from 2019.

The Ending Community Homelessness Coalition (ECHO) has canceled its annual point-in-time count of people suffering from homelessness for 2021 due to the pandemic. The group said it estimates the city’s homeless population, using different methods, including a database used to track services provided to unsheltered people.