Rob Bishop is a familiar figure at Covenant. He’s been spotted riding his bike to worship services on Sunday morning, hanging with students on the fourth floor, refereeing Upward Basketball and even coaching wrestling. The activity that brought him closest to God, said Rob, was being a D-Group leader.

During that commitment, Rob established an ongoing relationship with several young men, now all 19. “My six years as a D-Group leader was transformative,” Rob said. “It was also really difficult. It was difficult in the sense that I had to take the person I was and follow God to become a different me. But like I keep saying, I got more out of it than the guys did.”

Even though the guys graduated from high school last year, Rob and his group continue to grow in relationship. 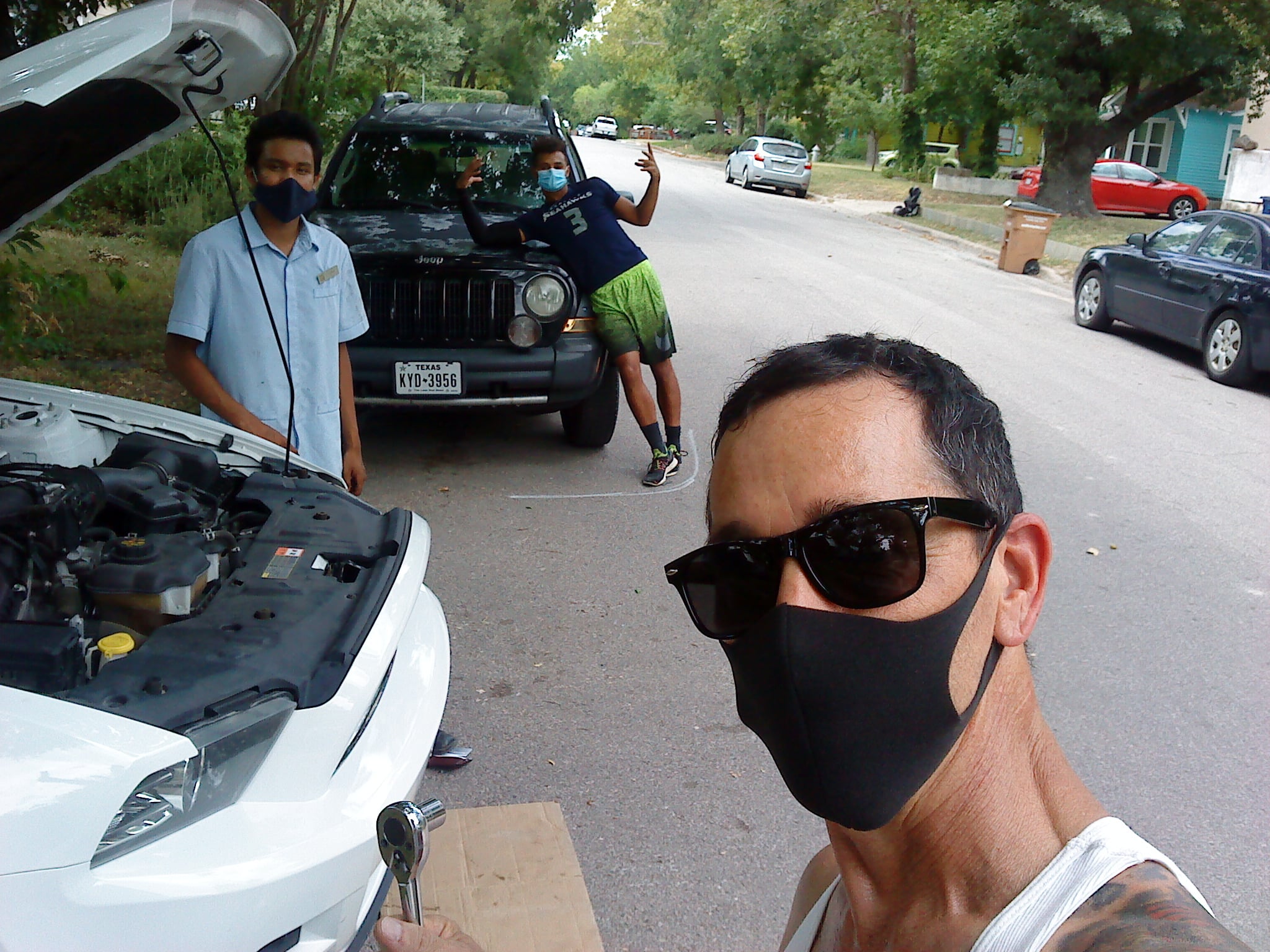 Random Get-Togethers
“’Out of nowhere’  is typically how I receive texts from the guys these days,” Rob said. “I can never predict when someone will send me a text.”

The texts lead to activities and the once discovered, other group members just show up.

Rob tells the story of an impromptu D-Group gathering at his house on a Friday morning in late July: “Grant texted me ‘out of nowhere’ and asked if I know how to change the oil in a Mustang. I was taking the entire week off anyway to tinker with my truck and do other projects, so I told him to drop by whenever. Later that morning, ‘out of nowhere,’ Sterling texted and wanted help fixing the non-functional rear window of his car. Of course, I reply that he can drop by whenever. Ambrose Augustine was already working in my back yard that morning. I’ve been gratefully engaging his services from time to time this summer to tackle yard projects I don’t have the courage to take on. So, why not invite yet another kid I know from church?

“Grant shows up, we get the car on the ramps. I showed Grant the procedure for a standard oil change, and left him to it while I took Augustine back home. Sterling shows up after a while and I finally remember to take a photo and send it to the rest of the guys. Next thing you know, Matt calls and asks for my address because he HAS to drop in and get in on the fun. So he rumbles up in his modified Mustang, and the party is on! Now we have four dudes grunting, scratching and talking about cars under the shade of my pecan tree on a summer day. It was splendid.”

Rob added that he “really appreciated that all the guys understood and respected that we had to keep masks on and keep some distance between each other. I didn’t have to say a thing about it.” 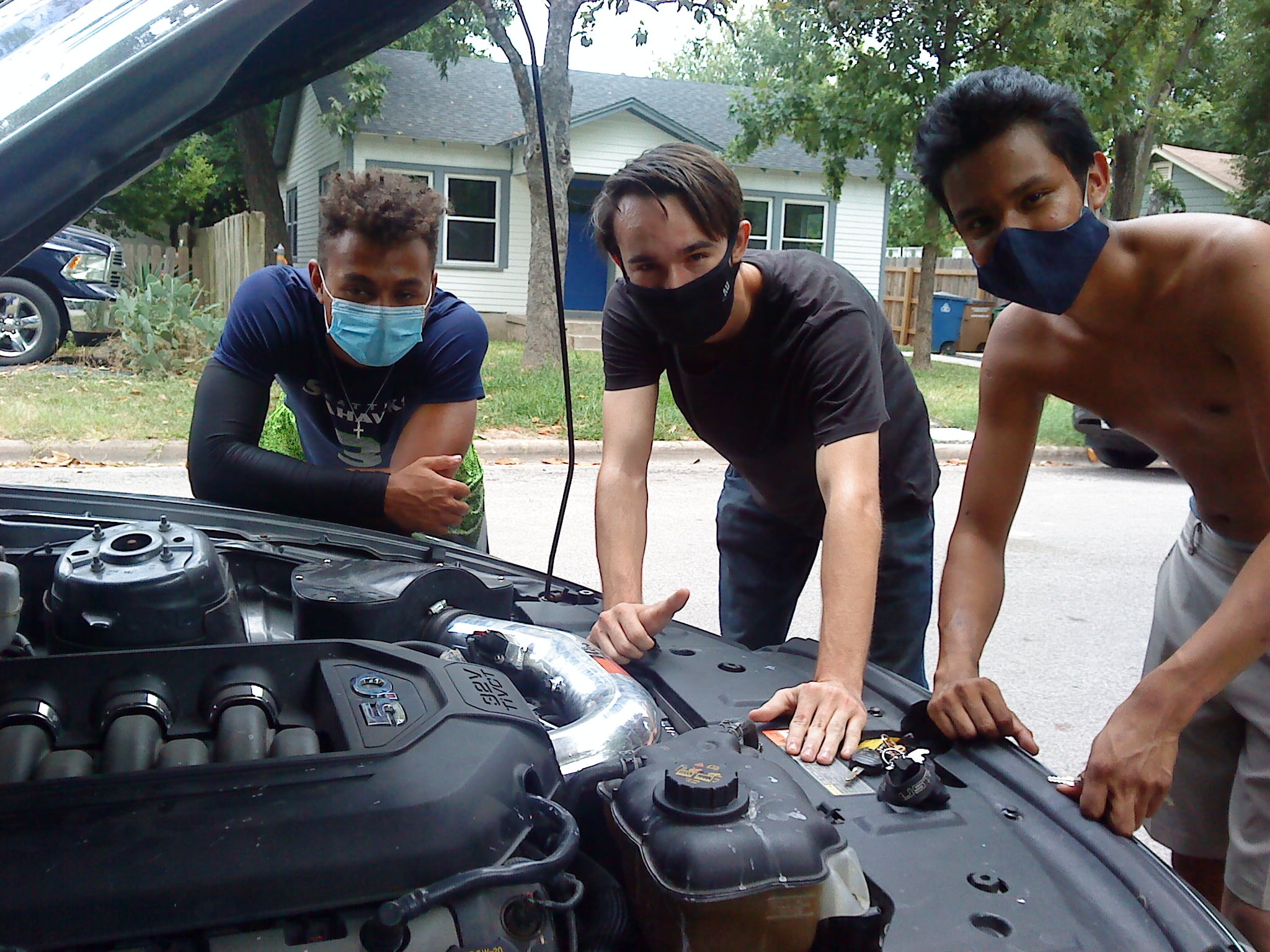 Making a Solid Foundation
During his tenure as a leader, Rob had a core group of nine guys who were “astoundingly” regular in their attendance throughout middle and high school. “By the time students get their driver licenses, they tend to participate in student ministry activities a lot less,” Rob said. “They are pulled in many different directions by school activities, other friend groups and extracurriculars. When they still show up for D-Groups as seniors, that says a whole lot more about how the individual kids and their households prioritize church participation, rather than how wonderful the D-Group leader is. Also, no matter what, we pray for the kids, and (as former high school director Nathan Richards used to say) just love on the kids.”

“There were so many times that I thought ‘I am just SO not cut out for this. What was I thinking?’ ” Rob said with a laugh.

“Being a D-Group leader really made me see that I needed to pray and rely on God to keep it together,” he said. “Before being a leader, I seldom prayed and I certainly didn’t feel like asking God for help with anything. I didn’t become a follower of Jesus until late in my life. So I really felt that I had to step it up if I wanted to be an effective guide to these boys. I really needed to pray more, read and consider scripture a lot more and become more involved in small groups, which I found to be far more important to church life than merely attending services. When I would, from time to time, tell the parents that ‘I am getting a lot more out of this D-Group than the guys are,’ that was absolute truth. My experience as a D-Group leader was truly transformative.” 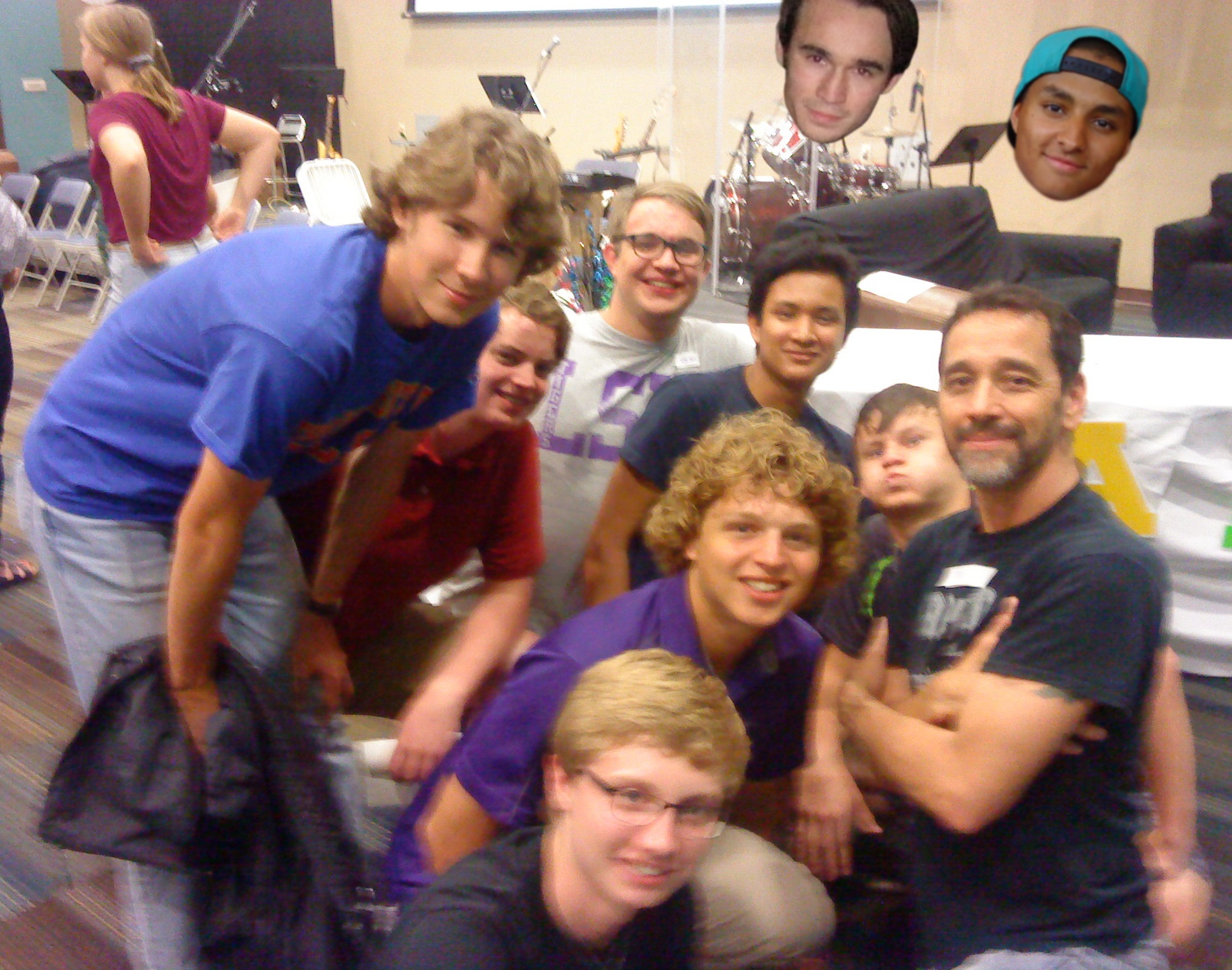 Fun Ways to Connect
Rob said that over the years, sharing things he loves with the guys was key to their connections. “I still vividly remember being a teenager, so it wasn’t difficult for me to share things that I enjoyed – simple things like biking, jumping fences, shooting hoops, talking smack, making up weird ways to compete, whatever. What was fun for 15-year-old Rob worked for 15-year-old D-Group dudes.”

Rob and the guys connected over occasional pizza/taco/burger bike rides. “Most of the guys had bikes, but some just had sad, neglected machines rusting in the yard. ‘No problem,’ I told them, ‘just bring the bikes and show up early and we’ll have a bike tune-up clinic.’ We did, and I hope it gave the less-mechanically-inclined guys some insight about bike maintenance.”

Biking mechanics is one way the guys have stayed in touch this summer. Paul Raper and Ian McIntosh have taken advantage of Rob’s knowledge. “Back in May, Paul’s mom asked if he could bring all of their household bikes over to repair and tune them up. Paul did and it was great catching up with him. He dropped by a week later with just his bike with some questions, and we got to hang out for a while again.

“In June, Ian brought his family’s bikes over for the same thing, only this time the bikes were in better shape and I was able to work with him on the tune-ups. Again, so great to spend some face time with one of my guys and find out what they’re up to.” 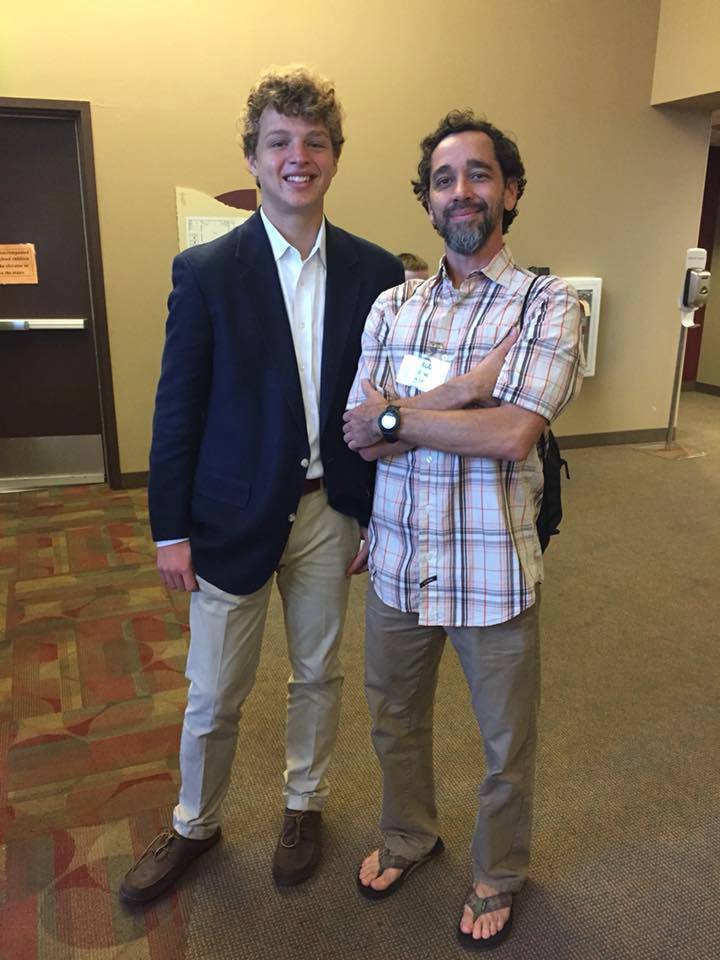 Rob has also received a lot of visits, texts and phone calls from Sterling and Colby during the summer. “They were struggling with various problems over the spring and summer and sought my advice and counsel. I was really honored by the fact that they both considered me a trusted resource. They are both, by the way, figuring out this ‘adulting’ thing, at their own pace and are both doing well.”

Paul is thankful for all that Rob has done for the guys. “I can say a lot about Rob and all he’s done for our years in D-Group, but really, it’s been just the atmosphere he created for our group all those Sundays and Wednesdays,” Paul said. “Rob would do whatever he could to keep us active and involved in the worship, whether it was having a secret Wednesday worship on the roof of the church or just going for a bike ride to get burgers and work with us there. He treated us like we were older than we were and gave me a reason to always be able to enjoy some part of Wednesdays or Sundays, even on days where the church was the last place I wanted to be.

“I can attribute so much of my attitude and how I carry myself these days to wanting to copy how cool Rob acted when I was a kid,” Paul said. “I look for ways to apply the lessons I learned from him to my college life in Tulsa. The church will always be lucky to have him, just like our D-Group.” 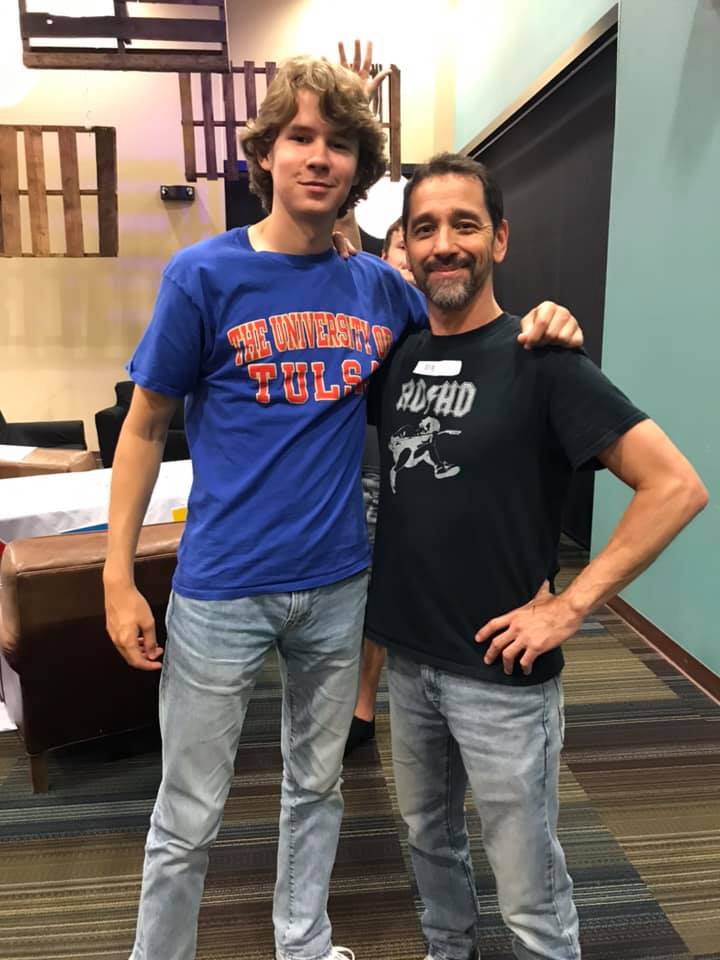 God Leads the Way
“When I think upon why this D-Group has kept up a relationship with me, I’d say, with no false modesty, that sometimes you just get lucky with the group that you happen to encounter,” Rob said. “This is a good and interesting and diverse bunch of young men, and I’m fortunate that God put us together.”

Rob added that a fair amount of work is involved in any substantial relationship. “I put in a lot of time and effort being a friend, mentor and fellow Christian on the path. I think if I had put less effort and prayer into the endeavor, I would have seen much less in return.”

And now that his group of boys is all young men, Rob said he does miss being a D-Group leader, but doing it again sounds daunting. “Fact is,” he said, “I’m still a D-Group leader. I expect that I built a lifelong relationship with these guys, and I look forward to watching them navigate life. I will always pray for them, and I will always be there to provide advice and counsel.” 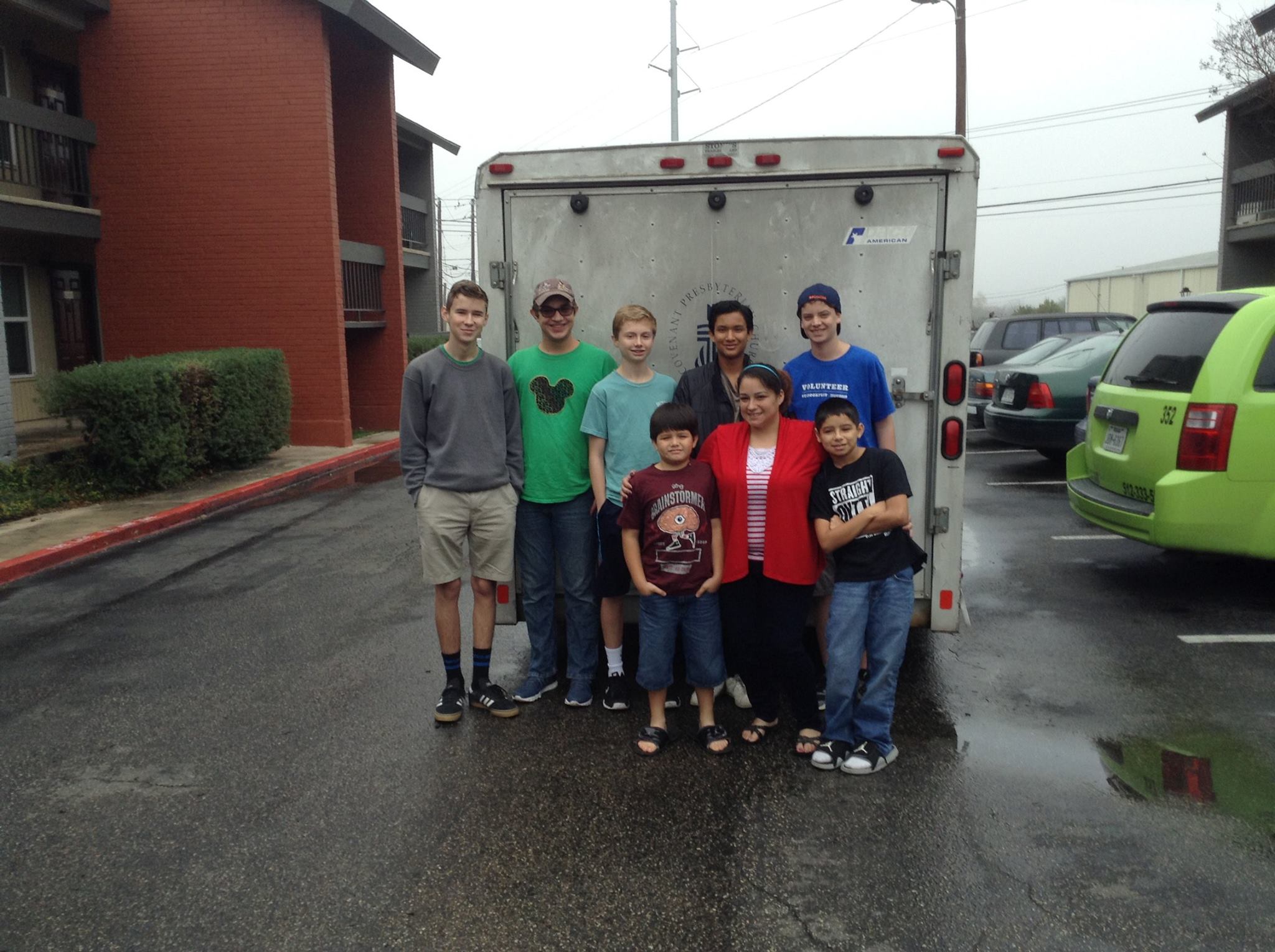 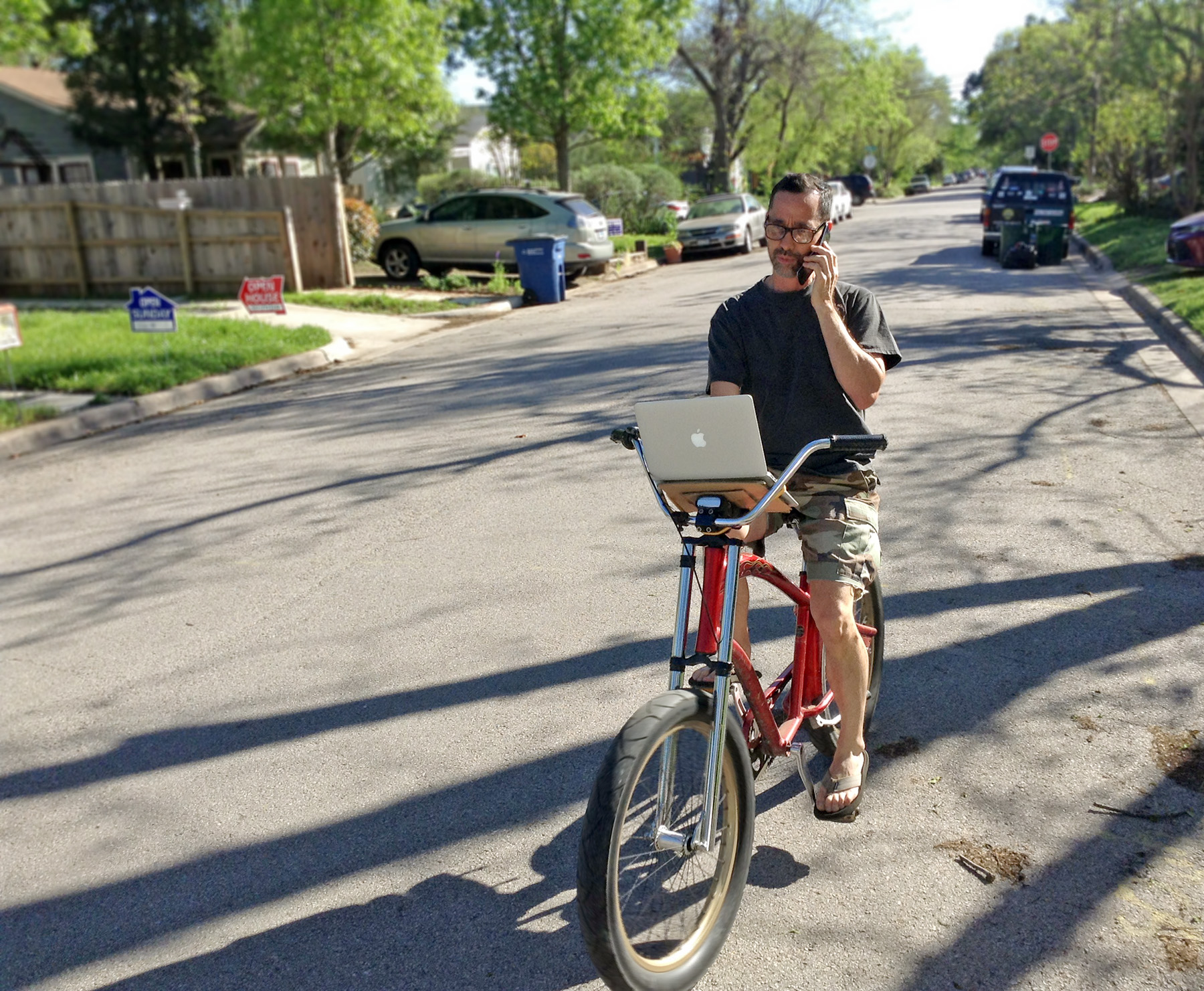