The year was 1994: Bill Clinton was president. Amazon.com was founded. And Jesse Reyes started at Covenant.

December 4 marked 25 years since Jesse was hired as a custodian at Covenant. He is the Covenant employee with the longest tenure. 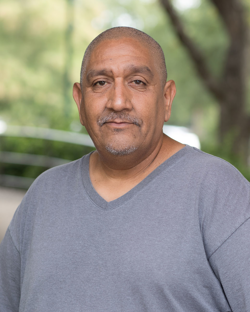 d the job,” Jesse recalled, “but I had to do the interview.”

Jesse had been working at the preschool, the 11 a.m. to 8 p.m. shift. “I was working through a temp company,” he said. “I’d already been here about a year and was good friends with some of the office staff. A few of them had told me ‘Larry’s gonna be leaving.’”

After interviewing with John Williams, then the head of personnel, Jesse was offered the job. At the time, George Claddis was the senior pastor.

“I wanted to work at the church. From day one, I have been taken care of. I’ve always said, ‘You take care of the people who take care of you.’

“I tell people who work with me, it’s not an 8 to 5 job. It’s a whole different environment. You are working for the Lord. I go above and beyond a lot. I don’t do it because I have to but because I want to do it. I don’t look at this job as just taking a paycheck.”

“Jesse takes a personal interest and really cares for the members,” Covenant Administrator Duane Dube said. “He’s built strong relationships with many of them.”

Jesse said people, indeed, have made the difference. “It’s the people who keep me here. I have so many good memories, it’s hard to pick just a few.”

When pressed, however, Jesse said, “One person who sticks out is Richard Vander Straten. He would give you the shirt off his back. He was on the Wrecking Crew (the group of Covenant members who do odd jobs at the church of Friday mornings). He took me in, mentored me, invited to come by his house any time.”

June Johnson, too, holds a special place. “June was a super lady. She really took care of me and my son. When she passed, her daughter, Paige Harris, called me. She said, ‘My mom really loved you. We would like to make you an honorary pallbearer at her memorial service.’

“I thought that was really special.”

Jesse also recalled his friendship with Jerry and June Briney. “One year, Jerry was the voice of God for a Vacation Bible School skit. From then on, whenever I’d see June without Jerry I’d ask, ‘Where’s God?’

“These people love you.”

A few years after starting at Covenant, Jesse bought a house. “The Lamplighters really took care of me. When I moved into the house, they had baskets of stuff and small appliances, and even a gift card to Target.”

“What I love about Jesse is how the different groups around Covenant really take him in and make him a part of the things they are doing. It’s really neat to see,” said longtime Covenant member and church employee Kathryn Sedberry.

At his 10-year anniversary, Jesse was urged to attend a Sunday worship service. “They called me up on the stage. It was a full sanctuary, and everyone stood and clapped. I’m not a public speaker. I could hardly get ‘thank you’ out.”

“Thanks for being such a rock star last night!” Children and Family Director Christy Milam interrupted our conversation to compliment Jesse. “You all worked really hard at our event.”

Such comments and late nights are not unusual. Jesse said his job often requires different hours. He works every other Sunday, which for many years has meant he’s working on Easter, and Mother’s and Father’s Days, and is called in to work some evening events.

Jesse is often the person who gets complaints when something around the church campus changes. From paint colors to carpets to furniture, people find Jesse to let him know when they don’t like something. “Change can be hard,” he said. “I listen and help when I can.”

Jesse has been with his wife, Jennifer, for 32 years. He’s got two sons and two daughters. The sons could be a bit of challenge growing up, for different reasons. His oldest son, Jonathon, was diagnosed with Guillain-Barré syndrome, a rare neurological disorder in which the body’s immune system mistakenly attacks part of its peripheral nervous system, when he was four. This was just before Jesse started at Covenant.

“He was falling down on the way to the car after preschool,” Jesse recalled. “I took him to the doctor, and he thought it was a virus, but Jonathon didn’t get better. By the time the doctor figured out what it was, Jonathon was paralyzed. Once the disease was properly diagnosed, the effects stopped and then slowly reversed.

“It took four months to figure out what was wrong, but Jonathon then had to relearn everything. Just like a baby first learning how to walk, he crawled and pulled himself up, and then finally walked.

“They wanted me to put him in a wheelchair, but I didn’t want him to give up. I’d carry him around and take him to my softball games at the ball park. He’d sometimes call me over to scratch his arm.”

Today, Jonathon is a contractor with Palm Harbor.

Jesse’s son, Matt, lived with his mother until he was nine, and then came to live with Jesse and Jennifer. Matt had ADHD and, according to Jesse, was a bit of a troublemaker. Covenant supported Jesse through some rough years with Matt, with members helping Matt secure a spot at the Presbyterian Children’s Home in Waxahachie and providing counseling free of charge. Matt spent a lot of time with Jesse at the church.

Matt moved out at 16, and today he’s a foreman for a lawn care company.

The light of Jesse’s life is his grandsons. He is quick to pull out pictures of the two boys. “My oldest grandson plays baseball and I love to go to his games.”

When Not at the Church … 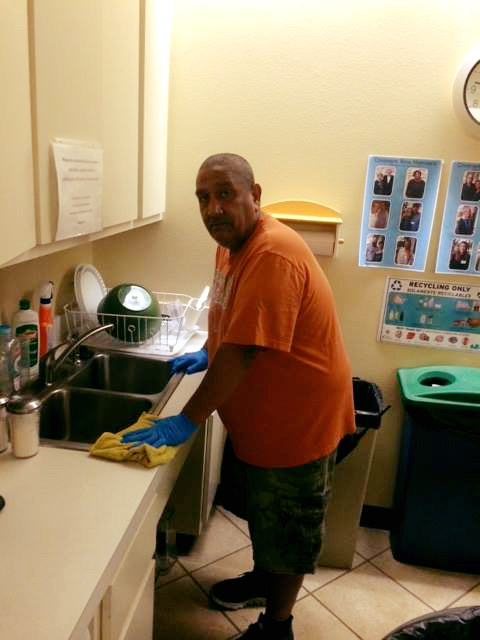 Speaking of baseball … Jesse is a pitcher on the senior softball, 50-and-over team. “Our big tournament is in Vegas. The World Senior Softball Tournament. We just play for fun, but we did get third place last year.”

Jesse played on the Covenant softball team back when the church had a team. He also played for a year on the Covenant basketball team and has joined members and friends for Monday night pick-up basketball in the Fellowship and Education gym. “The last time I played, I got smacked in the face by a guy who was too serious. I don’t play anymore. I was just in it for fun.”

One thing Jesse likes about his job is that it is a very active occupation. “I count my steps. I aim for 10,000 steps, but sometimes I go way beyond that. On Tuesday, I got 13,000 steps.”

Covenant members and friends hope that Jesse will continue to get lots of steps … while working here. And Jesse has no plans to leave any time soon.

“When I started, I did want to make it the place I retired from. But I am not ready to retire! I want to keep on working as long as I can.”

Covenant Associate Administrator Darleen Kleinhenz said, “Jesse has seen the church through many seasons. He’s often stepped up when needs arise. He is always here and we appreciate how dependable he is.”

Thanks for your service, Jesse! Here’s to another 25 years!