Helping Our Neighbors: An Unexpected Call 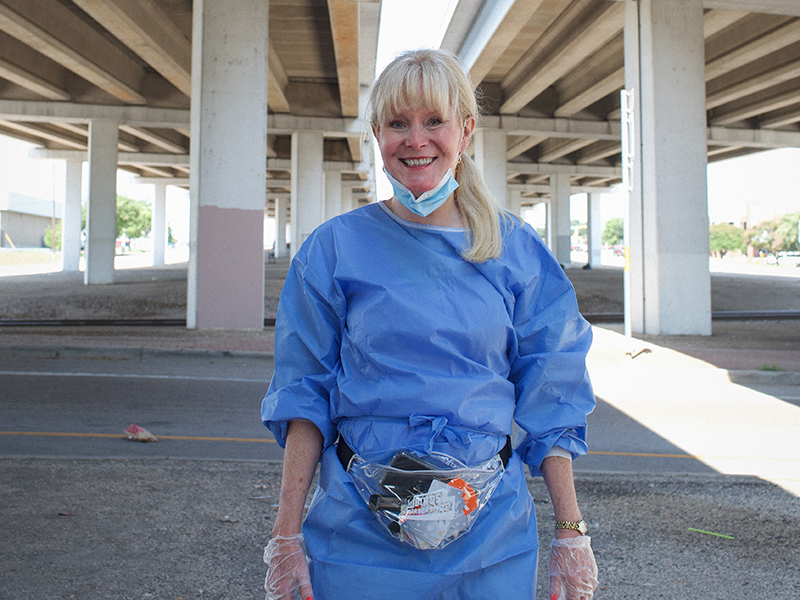 Jo Ibsen-Wolford is the founder of Helping Our Neighbors (HON), a small ministry focused on caring for homeless neighbors in Northwest Austin. Jo’s intention was not to help the homeless. “I never thought in a zillion years that I would be involved in this journey. This cause was ever in my path. What I feel passionate about are women’s issues and abused children. But driving by the stoplights in Austin and seeing the homeless people made me sad and embarrassed. I didn’t know what to do, but I thought, ‘I’m gonna go do something.’”

So Jo called a friend from a South Austin church who often visits the homeless and asked her to share her knowledge. Jo met with community groups and attended a few meetings. Unimpressed with what others were doing, she decided to create a program to provide showers, haircuts, dinners and clothing to area homeless. She started by calling churches in her Northwest Hills neighborhood.

“My first mission was just to get somebody living on the streets to smile, just to introduce a break with this pampering,” Jo said, but her plan was met with closed doors. At one church, she was told  ‘There are no homeless in our area,’ and at another,  ‘We don’t allow this type of thing on our campus.’

“The first couple of times that we held these events, I learned a lot of lessons,” she said, explaining that getting people to the event was key. “At first, I gave the potential attendees seven-day bus passes to get to Northwest Rec, and we only had eight people show up. I learned that I have to pick them up and deliver them to the event.”

The events eventually moved to Body Business. Initially, the gym owner was afraid the homeless people would start hanging out there. Jo said she understood that perspective, but there was never a problem. 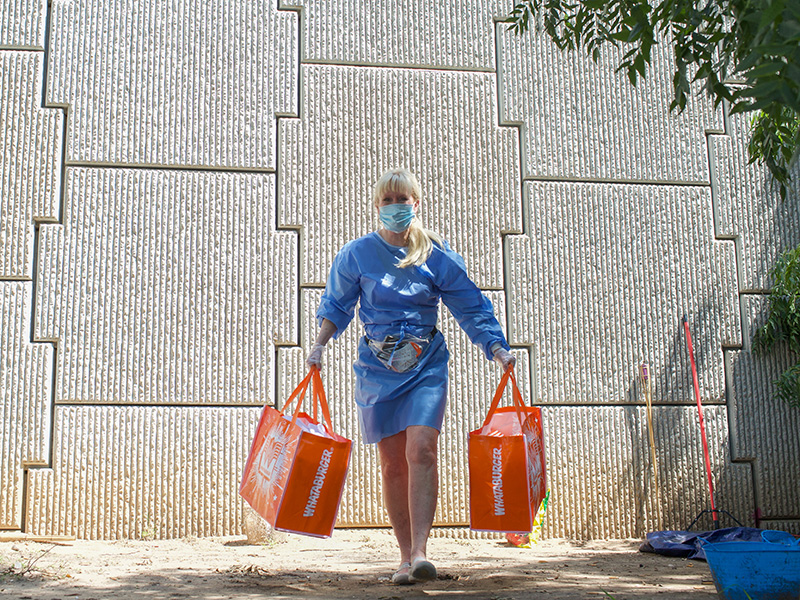 Pandemic Adjustments
Now, in the wake of Covid-19, Jo’s events have been put on hold. But Jo hasn’t stopped. She spends nearly every weekend delivering food and ice to the homeless, and she gives other forms of assistance.

In mid-September, she picked up 50 meals from What-A-Burger and filled a couple coolers with soda and ice. Jo drove to the bowling alley at the corner of 183 and Burnet Road, where she was immediately met by a man living in the area; she gave him a t-shirt.

“Alan Graham told me that if you wouldn’t give it to your best friend, don’t give it to the homeless,” she said after the man walked away. (Graham is the founder of Mobile Loaves & Fishes and Community First! Village.)

Jo walked across the busy street, carrying a large bag filled with the meals; her helper pulled the cooler with soda. Jo chatted easily as she walked. She said she’s never afraid to be here and constantly played down her generosity. She shouted, “Hello” and “Is anybody home?” at the various tents. There were bike parts and luggage; some spots were neat, but others were messy and Jo told the owners to clean them up.

The homeless met her with smiles, thank you’s and stories of what’s been going on in their lives; it was hard for them (and for Jo) to hold back their hugs.

This act was repeated over and over as Jo drove down the frontage road, stopping frequently, crossing the busy streets on foot – sometimes running – and delivering the food, t-shirts, sodas and kindness. At every stop, she was greeted warmly.

Less than two hours later, Jo has delivered 45 meals. She’d promised to deliver a cable to a man living off of Oak Knoll so she headed north, taking the last five meals.

“Some weekends, I help with other things for the men who are housed. For example, this weekend I took a man out to lunch to work on a donated laptop. The laptop ended up needing a new battery. (It was for him to go to AA meetings on-line.) But I tried to teach him how to use it. Yesterday, I helped a vet who was homeless for years file for the stimulus check.”

HON’s Reach
The HON service parameters are 2222 to 360 to 183 to North Lamar, with a focus on 2222 and Mo-Pac. “I have lived under that bridge,” Jo said, adding “this has been a joyful journey; it has also been frustrating and very, very sad.” 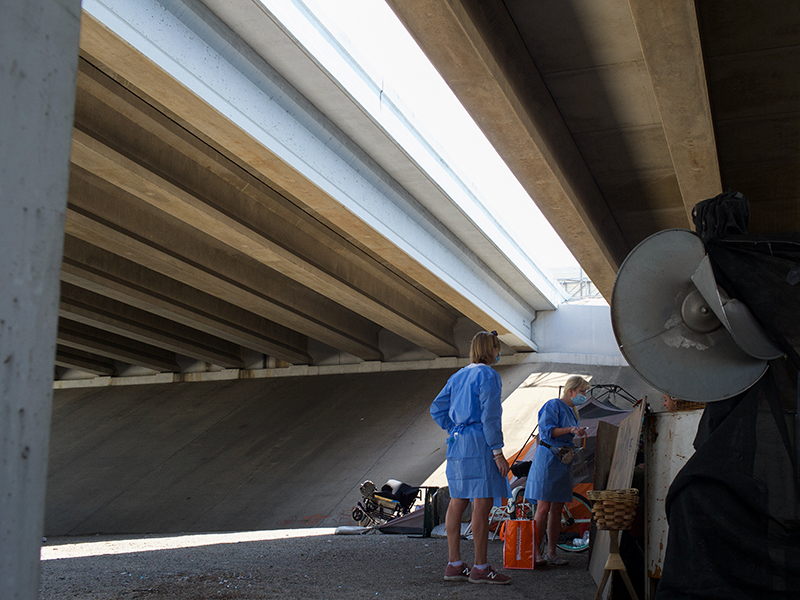 “Even though I’m trying to help other people, I’ve received some incredible gifts — the people I meet, the strangers who call and ask how they can help. One time I was in Academy buying about 50 cups and jugs. A lady asked, ‘Why?’ When I explained, she handed me $20.”

Jo recalled some of her clients. One of her most powerful memories is of “Puppy.” “I didn’t think Puppy was gonna make it. He had lost a leg in a drug deal gone bad. But one day, he just quit drugs cold turkey. That is truly a miracle,” Jo said.

Puppy was suffering from lung cancer and Jo helped him find housing. “When he said, ‘Thank you for allowing me not to die under a bridge,’ that was incredible,” Jo said. 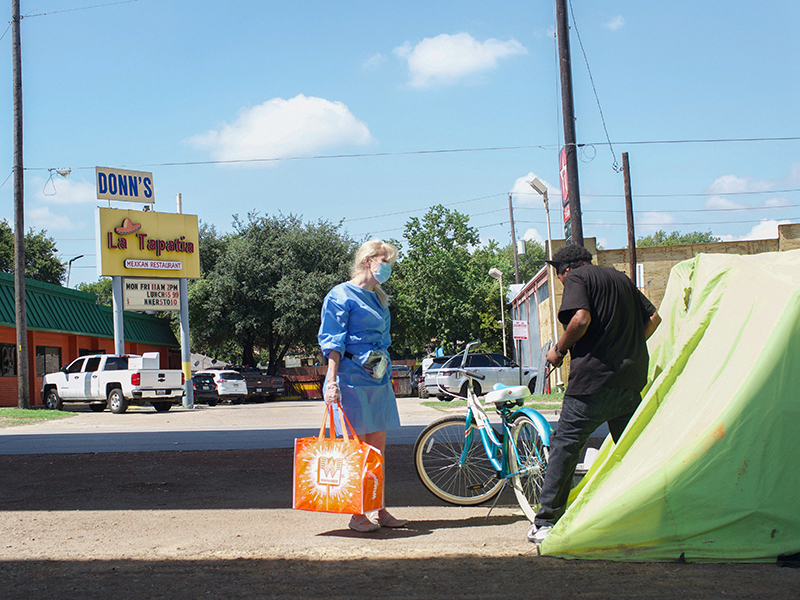 Every Day, a Lesson
Most of the HON clients live on about $720 a month from Social Security Disability Insurance, but not all clients qualify. Some don’t want help. Jo said, “People under 2222 are definitely drug users. I ask them to meet me halfway, and if they don’t, I won’t help. Some are not ready for my help.”

She sees a lot of her clients get help, start jobs and still get sucked back to their addictions. “It breaks my heart. One of my clients now looks 20 years older than he did last summer.”

Another client, Cowboy, was wheelchair-bound. He drank and did drugs and often defecated on himself. “He was not willing to get clean. I was walking down 183, and Cowboy was in front of an abandoned coffee shop. He had his cans of beer. I said, ‘You’re grumpy, Cowboy’ and he said, ‘You would be, too, if you lived on the street.’”

“He wanted me to lift him from his chair onto the ground. I didn’t want to. I didn’t want feces all over myself. I said, ‘He is a child of God.’ It was such an aha moment. I thought, this could be Jesus. Cowboy died a few months later, but he taught me a very good lesson.”

“This small ministry really started because of God’s clear call on Jo. She’s not an expert, she’s not a social worker, she’s not a therapist. She is a Christian who saw a need and Christ called her into it and she faithfully obeyed the call to love her neighbor as herself,” said Covenant Mission Director Whitney Bell. “The fruit she’s seen from caring for the homeless neighbors in this part of Austin has been astounding. She’s developed friendships, seen lives changed and watched transformation happen — all by being a good neighbor. She has also seen loss and the devastation that can happen from addiction and trauma. She continues to lean in and serve the least of these. Not because she’s been trained or because it’s her job, but because when she loves and serves these neighbors, she loves and serves Christ himself.”

Helping HON
Jo said that Alan Graham, founder of Mobile Loaves and Fishes and CommunityFirst! Village, defines homelessness as “a profound, catastrophic loss of family.” “I go further,” Jo said, “these people have come from really tough family origins and they are just really lonely.”

HON became a Covenant mission partner in 2020 and is our spotlight ministry partner for the month of September. Covenant is inviting members and friends to make manna bags and deliver them to the church on Sept. 16. Find more information about how to make the bags and about HON here.